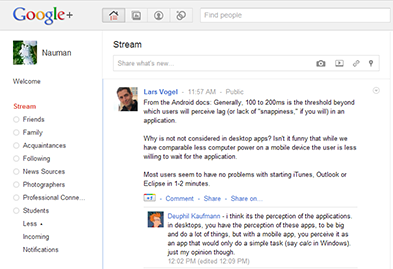 I know I might be in the minority right now but that’s how I feel. It seems Google has learned little from Wave and Buzz. Here’s what I think has gone wrong this time.

First, Google engineers have probably never heard of the phrase, “less is more”. They tried doing everything with Wave – everyone knows how that turned out. They’re doing the same thing with Google+ (or Google Plus). It’s twitter, friendfeed, skype, facebook and slashdot all rolled into one. The problem is, I don’t know which one I’m using when I navigate to the G+ interface.

I know I can divide people into circles and keep them separate but I don’t know if I can keep track of it all. I have separate ‘circles’ for friends and ‘professional connections’. Most often, though, I want to share a thought with both of them so I just post that to the  ‘public’ circle. My friends, goofy as they are, start commenting on the post and it quickly turns into a dorm room crap fest. That’s not the ‘professional’ image I want to project – that was the whole point of circles. The solution, post the same thing twice, once to public and again to friends. But then, why don’t I just go over to twitter and post there?

That, I think is the core of the problem. Why would anyone want to use Google+ – after the initial awe of the cool interface for dropping your friends in a circle subsides? For sharing news – I already have a neat little twitter account for that. It’s streamlined and it does what it’s supposed to do. When I’m there, I know what I’m there for. I don’t get distracted by comments from my goofy friends. Well, how about keep tabs on my friends? I don’t use facebook myself but last time I checked a lot of people were already using that social network. Just as people haven’t jumped the Yahoo! mail ship despite the immense impotence of Yahoo!, I don’t see why they’d move everything over from Facebook over to Google+. Not everyone likes to play with new and shiny geek toys.

And that brings me to the second point: Google engineers just can’t shake the geek within them. They think everything will be adopted if it’s similar enough to Gmail. They tried doing this with Wave. They did the same thing with Buzz, integrating it too tightly with Gmail and that was a fiasco. Now, they’re doing this with Google+. It’s all about how cool the technology is. They’re going to release the API soon.  That’s all great but what about the social aspects? I don’t see any incentives for moving away from my existing social networks – except maybe Buzz. So, I don’t think Google+ is a facebook killer or a twitter killer. It might be a  Buzz killer but that too is a maybe.